Home › Blogging › Medusa and John the Baptist: Could there be a Connection?

Medusa and John the Baptist: Could there be a Connection?

A 1742 Tarì coin of the Knights Hospitaller, depicting the head of Saint John the Baptist on a silver round platter.

There have been all kinds of speculation about the severed head that was reportedly used in Templar rituals. Many have linked this head with John the Baptist. Why would any group worship such a gruesome relic?

Let’s look into the myth of Medusa.

Medusa was not always a gorgon. Her story begins as a beautiful virgin priestess. What caused the change was the upsurge of Passion or Kundalini. The Greek mythologists use the act of rape by a God or mystical force to represent this event. (When the upsurge of energy takes place within an anima-based or creative personality, I can tell you from personal experience that it truly feels like rape.)

Medusa gains the ability to kill with a stare. Her hair is made of serpents, which is another symbol of the upsurging and unbalanced nature of Passion or Kundalini. She becomes a member of the Goddesses of Wrath: Kali, Sekhmet, and Pele. 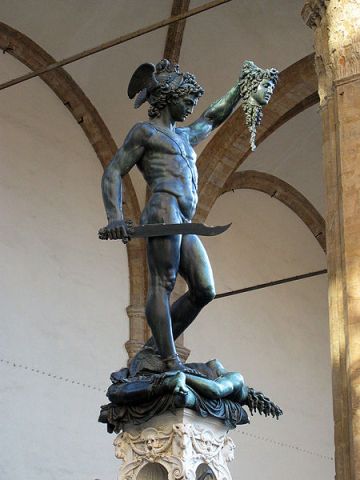 Perseus with the Head of Medusa, by Benvenuto Cellini, installed 1554

When Perseus cuts off Medusa’s head, the head still contains the power to kill. Perseus uses this head to kill the king that was forcing his mother to marry him. Medusa’s head is found as a protective image and is branded on shields, armor, and thresholds of houses.

How does this compare to The Knights Templar worshipping the severed head of John the Baptist?

The Knights Templar confessions give the impression that at least one faction was quasi Gnostic. They worshipped the Divine Feminine known as Sophia. They revered John the Baptist because John’s system of worship was to increase and uplift the Passion within one’s self. The fire within destroys the ego.

Like the evil king in the story of Perseus, the Templars were not fond of God the Father. They did not want God the Father to impose His Will (Grace) on the Divine Feminine or Sophia (Passion or Kundalini). The head is the focus of power for groups who revere the Way of Passion.

The severed head of John the Baptist is used by the Templars in the same way Medusa’s head is used by Perseus, both kill the malevolent king and symbolize a protective power.

2 comments on “Medusa and John the Baptist: Could there be a Connection?”